With all due respect to NASCAR fans and the legendary Dale Earnhardt, the police service dog can also be considered legitimately as “The Intimidator” for law enforcement purposes when justifiably deployed and positioned properly.  I believe our police dogs are an excellent tool that should be used as crime and crowd control deterrents and also used to assist with crowd control based on the totality of the circumstances.   I know suggesting these two situational tactics may cause heart palpitations and create immediate heartburn for administrators and supervisors who have not been properly educated how to properly deploy with a police service dog and the benefit in doing so.

Perhaps, and rightly expected, some administrators, supervisors and agency attorneys may cringe when they read advocacy for a tactical concept that recommends we use our police dogs to deter uncooperative or potentially uncooperative people so that they become cooperative and serve as a deterrent to those who may be contemplating a criminal act.  I would use the word “intimidate” in lieu of deter but some general definitions (“fill with fear”) and its normal implication aren’t necessarily positive for law enforcement use and should be avoided.

We have long been schooled and learned firsthand that our “uniform presence” is one of our more effective “tools” as a use of force option so it should stand to reason the police dog can justifiably accomplish the same type of presence under reasonable circumstances.  “Verbal judo” has been taught for many years and used successfully.  So, we should teach our police dogs to bark on command and use the dog’s bark to assist our efforts to maintain law and order when appropriate.  Persuasion can be an effective instrument in obtaining a suspect’s cooperation and the presence of police dogs can be very persuading at times.

During my tenure as K9 supervisor, based on discussions with my handlers and particular situations we all had previously encountered as handlers, we authorized a legitimate tactic and created a non-deployment statistic titled “K9 Deterrent” as a means to track situations involving our K9 teams that didn’t involve a bite, physical apprehension or surrender.  I have long been an advocate of tracking successful methods of using our dogs beyond typical deployments as well as the physical apprehensions and bites.   And, personally, I know that administrators like to learn about “non-contact” arrests and tactical resolutions that don’t involve medical treatment, hospitalization and the potential for liability.

My police dog once held back a hostile family trying to intercede with an arrest of another family member in the front lawn of a their residence.  Another officer and I were struggling to handcuff a resisting suspect on the front lawn of a home as a group of about five or six family members began moving forward, threatening us and preparing to engage us physically to rescue the suspect.  I called my dog from the car and directed him to do a guard-and-bark of the family positioned between the family and officers.  It was a stressful situation.  The family did not want any part of this dog and backed off.  As soon as the suspect was handcuffed and we started back toward our patrol cars, I recalled the dog and directed him back into the K9 car.  The dog did a great job and I was immensely relieved he didn’t bite any of the family members – though a bite would have been justified if directed.   I think the use of the dog was an excellent deterrent as he encouraged a retreat by the hostile family members which potentially saved us from being attacked and possibly injured.

The “K9 Deterrent” category includes incidents where the police dog is specifically placed in a particular location as to influence uncooperative or potentially uncooperative parties to be cooperative with police on scene.  The ability to influence these situations in a positive manner can often be accomplished by merely arriving on scene, directing the police service dog to bark or removing the dog from the police K9 car.  These deterrents could include;

My advocacy and recommendation for this non-deployment is clearly dependent upon a solid policy, verifiable training and a clear understanding of how to successfully accomplish the tactic that results in the deterrent.  Like many things we do in law enforcement, the abuse of this “tactic” can easily lead to negative publicity and a negative image as well as litigation when bad decisions are made, common sense does not prevail and things go wrong.

There does not have to be specific comments or other articulable facts to fall into this category for the statistical purposes of recording the deterrent.  However, if the “K9 deterrent” incident is deemed significant to deter a particular situation, a report of some type documenting the details should be generated and filed.

You probably didn’t personally experience it, but you may have seen unfavorable photographs and film of police dogs being deployed in crowd control situations and demonstrations in the 1960’s where these K9 teams were “front and center” on the skirmish lines.  You may have seen these dogs barking at demonstrators, lunging at protestors and biting those in the front and easily accessible who or may not have been committing a crime. 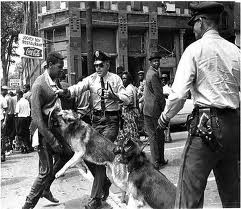 At my agency, we were not initially allowed to deploy our police dogs for the specific purposes of crowd control.  I’m certain that decision was based primarily on the prior bad practices and negative images of those K9 teams in the 1960’s and 1970’s.  The negative images of the past influenced the decisions and policies endorsed by current administrators.  There are many policies today that continue to prohibit involvement of K9 teams in crowd control situations.

We did not put our K9 teams on the front lines nor side-by-side with the officers assigned to the skirmish line.  As you may know from experiences with unruly and often drunken crowds and demonstrators, the opportunity for interaction and accidental contact by the dog greatly exists.  We do not want to take those unnecessary risks to accomplish our primary goal which is usually to disperse and/or control a crowd.  We did not want any pictures or “live footage” of our dogs even remotely resembling those police dogs attacking the crowds during the 1960’s.

We positioned our K9 teams behind our “linebackers” – those officers positioned behind the skirmish line, responsible for going hands-on if a “suspect-demonstrator” managed to “unlawfully” break through the skirmish line or was passed back from a front line officer for the purpose of arrest.  By doing so, the skirmish line is able to maintain or quickly recover its line integrity and prohibit further interruption.  The K9 teams are now available to assist the linebackers if needed to take the suspect into custody or take the position of the linebacker while the linebacker attends to an arrest.   The deployment of the K9 team within a crowd control formation should be discussed in advance with the team leader who is positioned in-line or slightly behind the linebackers and the K9 team can be verbally directed and deployed by the team leader.

Here’s an actual guideline followed by an explanation/diagram of a skirmish line with K9:

K9 Deployment.  One K9 team may be assigned minimally to assist with crowd control.  The dual purpose of the K9 team is to provide assistance as a support team to the squad and to serve as an additional deterrent for the team’s show of force.  The K9 team, if used, should be ideally positioned behind the team leader and linebackers during the formation of skirmish lines and subsequent team movements.  Its purpose is to provide a rear guard, if necessary, and assist linebackers if demonstrators have physically broken through the skirmish line and pose an immediate threat to team members and the squad integrity.  The K9 team will not be used on the skirmish line.

It is important that K9 teams regularly participate with crowd control training if they are authorized to deploy in those situations.  When you are using volunteers as your unruly crowd, make sure you include a decoy or two wearing a hidden bite sleeve so you can properly prepare your dog for an encounter.

In conclusion, you want your deployment policy and the ability to deploy to be clearly articulated in both your operational manual and training documentation in anticipation of any potential litigation.  For example, I recently reviewed a policy which read:  “Canine Units will not be used for crowd control without authorization of the Watch Commander on duty.”  I strongly recommend you use your police dogs for crowd control, but you do not deploy your K9 teams into crowd control situations unless you have a policy allowing it and have previously conducted documented training.

If your law enforcement agency would like to obtain a sample guideline for crowd control that incorporates the use of a police dog, you can send a request via your department work e-mail to me at sgtblewis2@aol.com.

This article was first published in “Police K-9 Magazine” (November/December 2012).